Serbia booked their place in League A following the away win over Norway in Group B4 on Tuesday. The Serbians came into the game needing to beat group leaders Norway to usurp them and secure promotion from League B to League A. In the end, they were able to secure the needed result via a 2-0 scoreline. 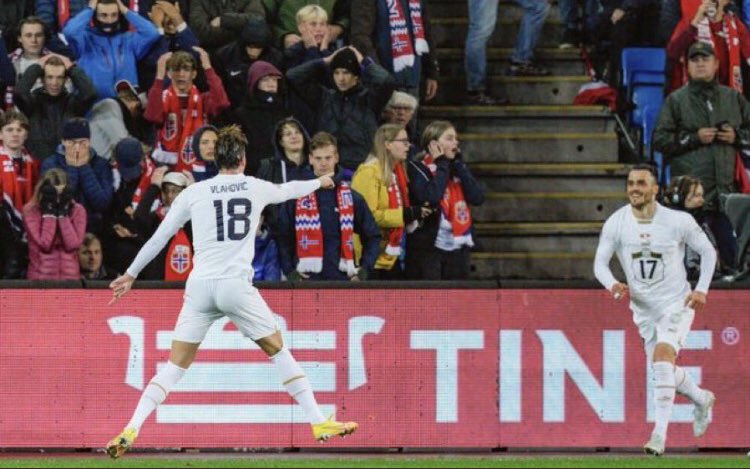 The Serbians came into this month’s set of UEFA Nations League games in Group B4 with the knowledge that only two wins from the final two games will give them the chance of making it to League A from League B and they were able to achieve the target. In the first of those two games, Fulham striker scored three times to lead Serbia to a 4-1 home win over Sweden. Three days later, they sealed a 2-0 win at the home of Norway thanks to the goals from Juventus star Dusan Vlahovic and the aforementioned Mitrovic.

Hosts Norway came into the game with Serbia knowing that at least a draw will secure their spot in League A. However, they were unable to achieve the draw needed from the game. The Serbians scored twice without reply to replace the Norwegians as the only team for promotion from League B to League A. Juventus striker Vlahovic scored the opener for Serbia three minutes from the half-time break to ensure that his team took a slender advantage into the interval. The lead was doubled by Fulham hitman Mitrovic nine minutes into the second half to make it four goals in his last two games. His strike sealed the win for Serbia and a place in League A.

The Serbians are in a good place ahead of this year’s FIFA World Cup tournament after winning four of their last five games with the other game being the 2-2 draw in Slovenia with ten men. Serbia are in Group H at the World Cup alongside Cameroon, Brazil and Switzerland.